“Grandma Grace is in the middle of my brother’s head,” Aunt Vicki texted then sent the photo. I immediately recognized Granddad Charles, a much younger and vibrant man than I had lived with. But 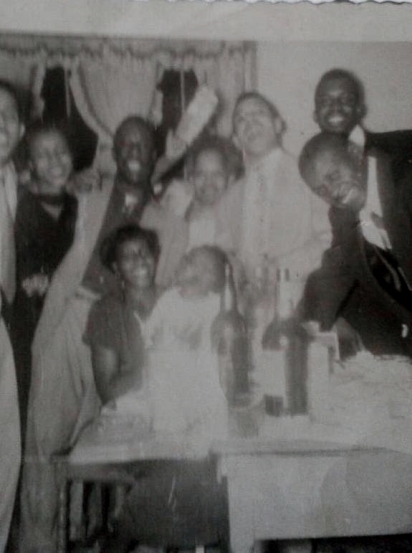 this woman couldn’t be my Great-grandma Grace. She didn’t fit my imagination on the melanin spectrum. She wasn’t dark brown like her son but high yellow like her daughter.

I couldn’t stare at my Iphone 5 screen any longer without clarity. I dialed Aunt Vicki.

“Where is Great-grandma Grace? That lady is Granddad’s sister.”

Aunt Vicki chuckled over the phone, “No, Shaunie. Aunt Lucile looks just like Grandma. I wish I had a better picture. One in color. One with more detail. Maybe I’ll find more. Maybe you can do something with it over the computer.”

I became a still picture. Like the moment that picture captured of these nine people. Three who are family; the rest possible close friends. But everyone was smiling even the face that is half out the frame. This had to be before Granddad Charles and Grandma Carmen’s youngest, Aunt Vicki and my mother, were born. What were they celebrating?

The celebration is a moment to remember. All the men have on suits. And all the women have on dresses. Maybe that was the standard of the times. They gathered inside a small kitchen, no a dining room somewhere in New York.

Great-grandma Grace seems to be proud of her son. Her brittle hand over his broad shoulder while he leaned in reflecting how close they were. The smiles don’t seem scripted but genuinely made. As if this is a moment they were free from all they couldn’t control. Like Great-grandma’s husband Eugene Hunnicutt had long been out the picture. Neither his wife or son are caught in the past. But standing up and able for the future.

Great-Grandma Grace looks no older than her late fifties or early sixties. Although the picture is black and white, I can tell that her hair has grey and black streaks competing for dominance. This picture shows nine people during a celebration none of them want to forget.

Great-Grandma Grace didn’t like to forget anything. She had been the only ancestor I found who kept a family register of her children’s names; marriage dates of her son and her own; and her parents’ names and birth places. But when she died on September 6th 1963, her son left the death certificate’s date of birth blank. A grown son should know his mother’s birthday. But Granddad Charles informed that she was 73 years old. Maybe Great-grandma Grace not knowing her own birth date made her capture everyone’s important dates.

Great-grandma Grace was a resident of Brooklyn, New York for 35 years. The other half of her life she had lived in Washington D.C. But it wasn’t her birthplace.  She was born in North Carolina like both her parents, per the 1910 United States Federal Census. The same year she will marry. But at that time Great-grandma Grace is 18, single, and living in her mother’s D.C. home. She’s a Cook in the hospital industry not a White House Cook like the family myth. Maybe it’s a white hospital. A 1900 Census would help place her teenage years.

Great-grandma Grace would have been an infant, while 2nd Great-grandma Mary C. Galley was a 35 year old widow making her Great Migration from Wilmington, North Carolina. I have no evidence that suggests her husband Armstrong Johnson made it. Nor do I know when the move took place. A birth certificate may help clarify when Great-Grandma Grace was born and when her mother took exodus.

The difference between Wilmington, North Carolina in 1890s and Washington D.C. in the 1910s was a literal life and death. A Coup D’ Tat took place in 1898 in that southern state. Great-grandma Grace, who was born in 1890 in North Carolina, would’ve been about eight years old when it happened.

Granddad Charles named his 1st daughter his Mom’s namesake. Only Gracie, a variant, that would be changed back. But Great-Grandma Grace’s maiden name was Johnson like her father’s last name. But it maybe a sort of slave name since Johnson is not a name that comes from West Africa or any part of Africa. There is so much missing. But like Great-grandma Grace I capture information, constantly trying never to forget. Hoping, I can no longer ask what’s left behind.

7 Generations – is a blog series that digs into my family tree to consider the impact of circumstances and decisions through the generations.

Rashaun J. Allen (@rashaunjallen) received his MFA in Creative Writing and Literature from SUNY Stony Brook. He’s eyeing agents to help publish his coming of age story, Christine’s Dream – A Memoir of Love, Loss & Life. He is the author of A Walk Through Brooklyn & In The Moment and has been published in TSR: The South Hampton Review. When not writing he runs for the thrill of crossing the finish line. Find more of his work at www.rashaunjallen.com